Recipe of the Day: Day 8, Herb-Roasted Squash with Quinoa & Cranberries

Let’s be honest. I should consider eating a vegetable other than cheese popcorn sometime soon. Is quinoa a vegetable? In December, it’s close enough for me. Oh, but wait, this quinoa dish from my friend Anne over at ASquared actually does contain a vegetable – squash!! Oh, and pesto, which definitely contains basil, which is a vegetable-lite and pine nuts, which are a…legume, which is just a fancy word for almost a vegetable. Oh, and dried cranberries, the best of all dried fruits. Anyhow, this dish looks extremely satisfying, and kudos to Anne for inventing this bowl of awesome. Hi to you and the fam, Anne! 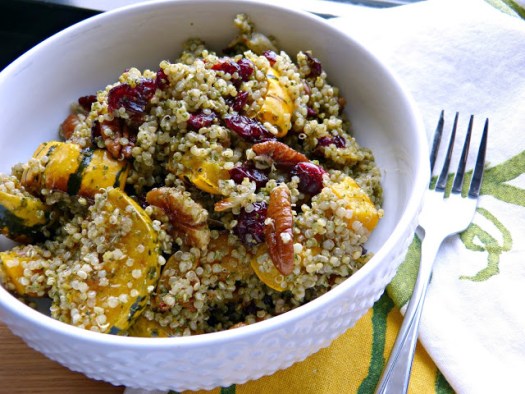 For the rest of the recipe with instructions, visit Anne over at ASquared. 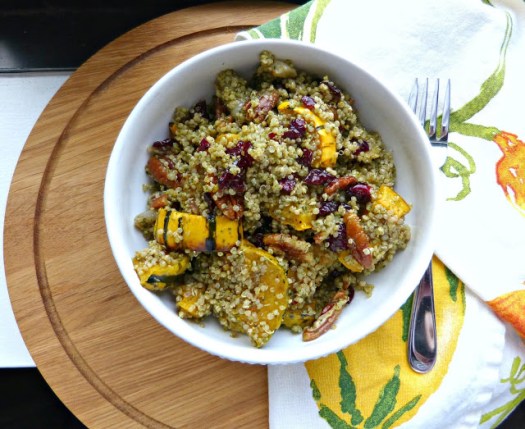 To be honest, you can eat this for lunch or dinner, even for a snack. It’s got quinoa (what IS quinoa? I read the entire first paragraph of the Wikipedia entry and still didn’t understand), which I cannot get enough of lately, and a poached egg, which is one my true food loves. Throw some salt and pepper on this, and it’s a real thing. Even though I’m confused about quinoa, I know they put it in everything at Protein Bar, so it’s gotta be good. This breakfast bowl keeps me full for awhile, and fits into the Weight Watchers Simple Start plan. At this point I know what you’re thinking – why do these photos look so good? My only answer is they were taken using the magical powers of sunlight, the one thing that can’t be found in my office or in the average Chicago garden apartment.

Here is the official recipe for the Quinoa Breakfast Bowl, in case you’d need such a thing.

Cook the quinoa. It takes approximately 20-25 minutes, so cook a bunch, because who has time for THAT? If you’re using leftover quinoa, put a big scoop into a bowl and microwave for 1 minute, then salt and pepper it (a lot). Ok, you also should have started boiling some water at this point for your poached egg. Once the water is boiling, drop an egg in it, eyeball it for doneness, and bring it out of the water with a slotted spoon. Put it on your quinoa. Take a picture, photo edit, write a blog, eat. It really is delicious. 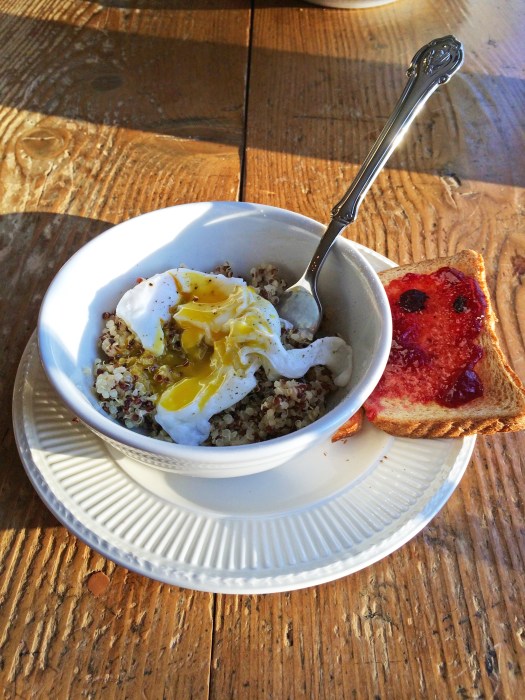 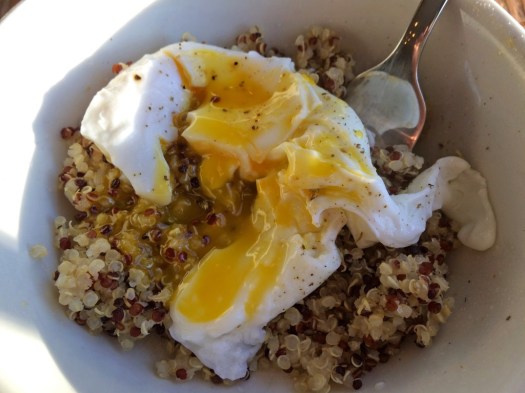 Recipe of the Day: Day 2 – One Pan Mexican Quinoa

Well, I don’t know about you, but I sat around eating like a total fatty over Thanksgiving. I’m talking all that and a family-size bag of chips fatty. I did manage to do some freezing cold runs around town; one with my bff, and one special one with my brother and sister-in-law (Go, Kim!!), but the eating…oh, the eating. Oh well, back on track now, and bringing you a recipe I plan to make soon! After finding out the hard way that quinoa is not couscous, I decided I enjoyed it nevertheless. Oh, and I adore Mexican food, so why not combine something I adore, and something I can pretty easily tolerate into one delicious-looking pot?

As always, I’m sending you over to the original blogger for the full recipe! 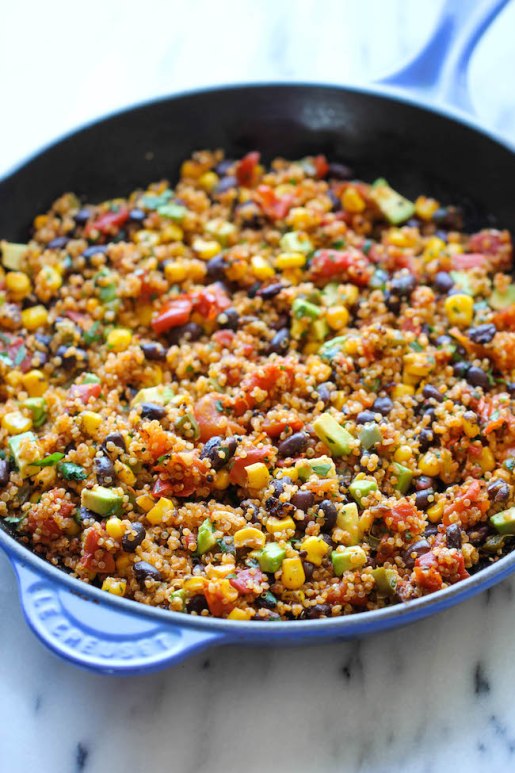 Directions: for the rest of the directions and full recipe, please visit the original recipe on Damn Delicious. 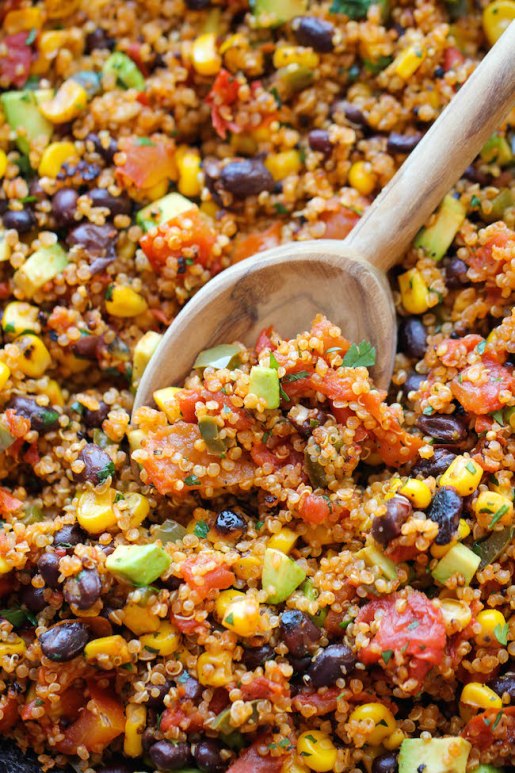 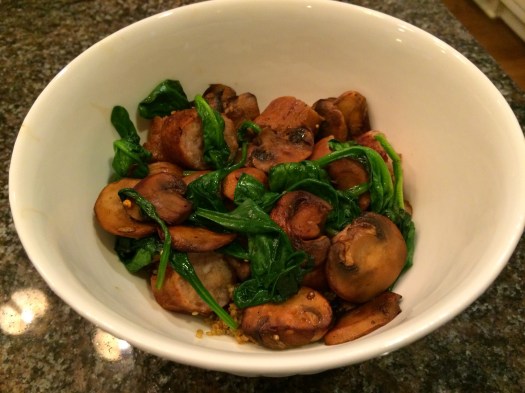 Hey, I made this, and it was pretty good! It was a recipe I thought up all in my head – sometimes the things I think up there turn out…ok.

This tastes like a big bowl of deliciousness, a good meal for transitioning into fall. It was my first time actually making quinoa, and I’ll admit, I had couscous in mind for this dish up until I dumped the quinoa out and noticed “Yep…that’s not couscous”. Oh well.

Here’s what you’d need if you were to attempt something like this at home. Feel free to make it even better – I won’t feel bad. 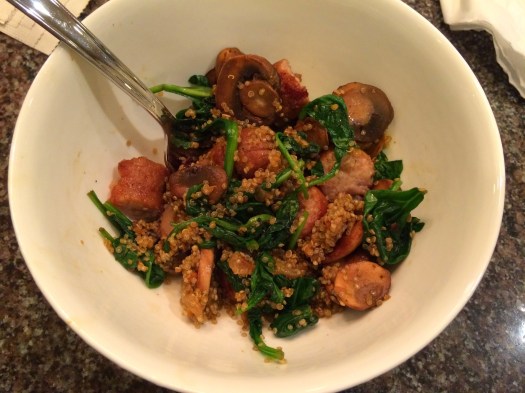 Start your quinoa by boiling the amount of water the package calls for in a saucepan.This stuff takes longer than couscous to cook, so be careful. You’re looking at a good 20 mins to boil the water and cook the quinoa. When your water begins to boil, throw the mirepoix in the water. Simmer for a few minutes, then put in the quinoa, turn the heat down to a simmer, and cover.

While your quinoa is doing it’s thang, brown the chicken sausages on medium high heat in a frying pan with a dash of olive oil or cooking spray. You can cook them whole or cut them into bite size pieces before you cook them. When the sausages start to develop some color (around 5 mins), throw in your mushrooms, and keep cooking. Stir occasionally. When the mushrooms start to brown, throw in some sherry. It’ll boil off. At this point, throw in whatever spices and herbs you’d like to the sausages and mushrooms. Turn heat down and simmer. If things start to dry out, there’s always more sherry, or you can toss in a little water or broth.

Check that quinoa! By this point, it’s probably close to ready. Throw in the cranberries. Trust me – it adds even more of that sweet and savory note. Stir in and cover.

When everything is starting look ready, throw in a 2 big handfuls of spinach on top of your sausage and mushrooms. Cook on low for a minute, then turn on off heat and remove from burner. Try to have your spinach retain more of a brighter green color. If it looks like the stuff Popeye would eat, you’ve probably overdone it.

Remove everything from heat, put the quinoa at the bottom of a bowl and layer the sausage, mushrooms and spinach mix over the quinoa. Take a bunch of pictures, and blog about it later. 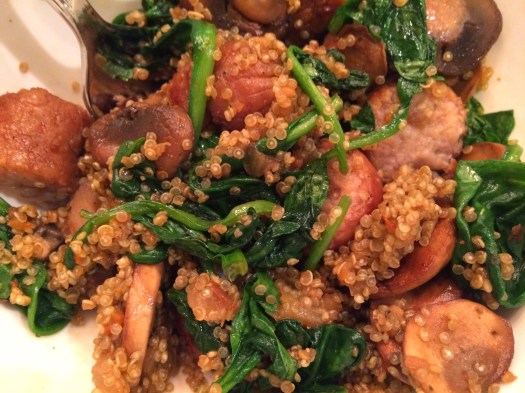