Like me, I imagine you, dear reader, as someone who is not independently wealthy and must therefore work, and while at work, spends a fair share of your day on Facebook, clicking away on articles such as “30 Hashtags Every Thirtysomething Really Needs” and watching YouTube parody videos of Taylor Swift’s “22”.

It’s all fun and games up until this point. Certainly you can relate to a 2 beer hangover, or definitely eating an entire block of cheese in bed while drinking red wine. This is all part of the growing up and growing older process, and it sort of sucks and is awesome all at once. But one day you realize that your body hurts, and it didn’t magically heal itself overnight. In fact, it’s your heel that hurts. So you begin navigating the deep dark waters of Web MD, or possibly the slightly less panic-inducing Dr. Oz for Plantar Fasciitis, make a podiatrist appointment and confirm that you, indeed, have Plantar Fasciitis. If you’re like me, the symptoms include – hobbling around like an old lady after getting off the couch, out of bed, off a chair, etc…, pain in your heel and arch, and especially worsening pain if you try to do anything to better yourself, like go for a jog.

Time to resort to drastic measures and reexamine your footwear choices. Glitter Converse with absolutely no support whatsover at least 3 years old that you wear on the daily – check. Not getting rid of those anytime soon. Ok, well, what about the shoes you wear to run in? Surely those things could use some improvement. And yes, they could. I bought a pair of Asics about 8 months ago online, and they just weren’t right from the beginning. I LOVE Asics and have run in them for years, but this pair was just off. Why were the shoelaces so short, to the point where it was difficult to work the double knot? Why did my very small feet look like they were possibly too big for these shoes? I’ve worn a 7.5 in Asics for forever, but these ones just looked and felt tiny.

In my really real life, I’m dog sitting this week, and am fortunate not to have to dance around in my undies at 6 a.m. because my dog owners have a treadmill…and it’s as awesome as you’d imagine. Netflix every morning while logging about 7500 steps – golden; that is, until your left foot hurts so much you resemble a 90 year old woman every morning when you get out of bed. Something had to be done – I couldn’t NOT work out on the treadmill everyday, but I couldn’t handle this stupid foot pain either. So I made the call.

I’d wanted to do it for awhile – go to one of the fancy running stores where someone watches you run on the treadmill, determining if you’re doing anything weird that might require truly special shoes, or if you’re just that slow. I packed up from work and went to Running Away Multisport in Deerfield, certain I would find another pair of Asics – ones that were better and even cooler!

Turns out that’s not what happened. I told the associate that I was interested in getting on the treadmill so she could watch me trying to look cool and run like a real person. She said great and put me in a pair of “test shoes”, the ones they make everyone wear when they get on the treadmill. They weren’t Asics – they were Brooks. And they were the BEST PAIR OF SHOES I’D EVER WORN. I kept telling her that I only wear the Asics brand, but my feet were cheating on my beloved Asics from the moment I put them on. I tried the upgrade pair of Asics just to be certain, and sure enough, I went back to the Brooks.

The other day when I was experiencing pretty bad foot pain, my boyfriend told me to just strap pillows onto my feet, and I swear to God that’s what these things feel like. The interior is all soft and smooth, the cushioning is truly cloud-like, the laces are long, and the color is….well, it’s sort of hideous for $162. But after running on them this morning, and wearing them currently because they’re just so comfortable, I can forgive this shocking baby blue palette. 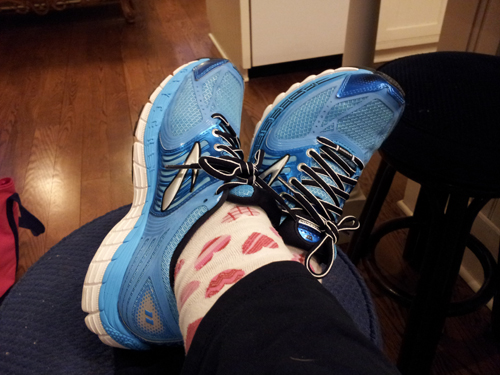 If you’re interested in experiencing them for yourself, they’re the Brooks Women’s Glycerin 11 Running Shoes

, and if you’re curious as to what they feel like before you buy, I definitely suggest going to a store that specializing in shoes for runners. It turns out I have a pretty even (slow) stride, and don’t need any sort of special shoe, so paying $150 for the fancy ones ($162 with tax) felt very extravagant. But here’s how I look at it – I have real foot pain, and now that I’m old, it’s not going away on its own. I’ve apparently got to take care of this body, and if $162 will keep me OUT of the podiatrist’s office, I guess I’m going to have to get used to sucking it up and forking it over.

Fitbit: One Tracker to Rule Them All

In November 2013, I embarked upon a  journey to a previously unexplored area of my personal fitness – step tracking. Having witnessed some really positive results from a friend who lost a bunch of weight combining a Fitbit Tracker integrated with MyFitnessPal, I decided that I should get one of these nifty devices. My friend has the Fitbit One, and when he demonstrated that you “grow a flower” when you’re very active, naturally I was sold. I, too, decided the Fitbit One was the way to go, and ordered one for a bargain $80 on Ebay. 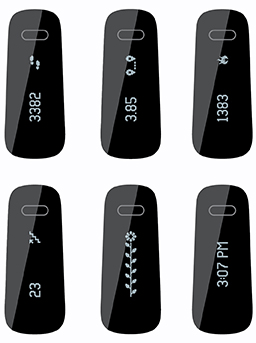 While there are a few different Fitbit options, the Fitbit One works for me for a lot of different reasons. First, I am not a jewelry person. I can’t even spell it right I wear it so infrequently (thanks, spellchecker!), and when I do wear it, I tend to fidget it with it a bit like an obsessive nutcase.  A wristband would just make me more mental than I already am, so the Force and the Flex were out. The Zip doesn’t track sleep or flights of stairs, so the One was really the best tracker for me. I’ve yet to use the sleep tracking functionality of the Fitbit, as you have to slip the One into a special wristband and wear it to bed, and although we’ve already covered that things like that drive me nuts, allow me to paint you a clearer visual picture: Oh look, it’s me, probably around the ripe young age of 21, coming home from a drunken fraternity/sorority bender, managing a small win by using the toilet correctly, but the whole time plagued that I can’t get the cuff bracelet off my wrist. This situation devolved into me slumped on the floor of the bathroom stall frantically picking at the clasp and mentally freaking out, all thumbs from too many Busch Lights. Luckily my roommate was always very helpful, not only in opening the kitchen with her set of president’s keys for drunken late night mini corn dog and taquito fests, but also in jewelry removal. Seriously, the thought of having to wear a bracelet to bed – first world horror. That being said, I am curious about my sleep patterns.

But back to the Fitbit – ah, this thing rocks! It counts all my steps, and you know what earns you steps? Mmmhmm, yes, walking, BUT also step-tapping and step-kicking while you’re drying your hair in the bathroom! And walking in place like a weirdo while you’re talking to your co-workers! And making up dance moves while in your underwear in the privacy of your bedroom! 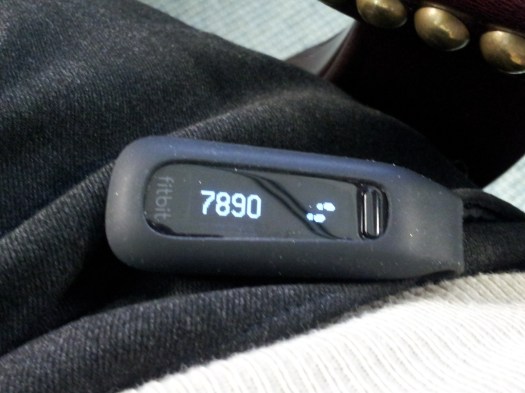 The Fitbit syncs with your computer and your smartphone (unless you’re like me and you’ve got a very old smartphone), and provides you with a sweet dashboard to track your activity. The Fitbit One tracks steps/total distance, total calories burned and flights of stairs climbed. It also knows when you’re very active (i.e. dancing like a crazy person in your undies), or just lightly active (weirding out your coworkers by marching in place). On the dashboard, you can add friends who also have Fitbits and see where you stand in the step race. Fitbit gives you a goal of 10K steps a day (you can change your settings at any time), and as of February 4, 2014, I’ve hit that goal every single day. Hitting that takes some work – 10K steps for me is roughly 4.5 miles, and you can’t really achieve that lounging on the couch all day. You’ve got to get up and bounce around, circle the conference room table a few times every hour at work, walk a mile and half in negative temperatures with frostbitten thighs, do some Leslie Sansone Youtube walking videos, etc… Basically, my new motto is “I’ll do anything for a step”, which is slightly more fitness-ly empowering than “I’ll do anything for a donut.” 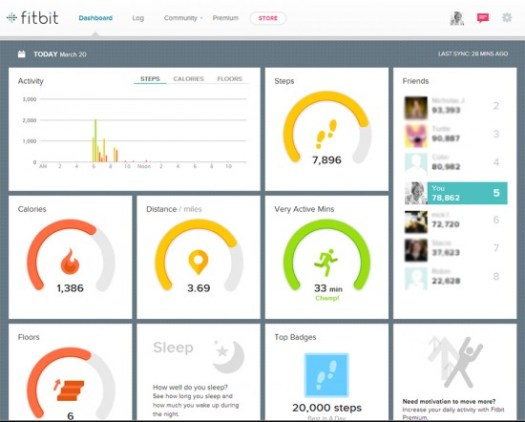 Along with accurately tracking your steps, you can integrate Fitbit data into other apps, which is very helpful. I did a very scary thing when I got the Fitbit – I went off WeightWatchers, a program/lifestyle I’ve been living since 2007. Don’t worry, I still PAY for Weight Watchers Online because I’m an idiot, but I’ve been using the Fitbit to integrate with MyFitnessPal to count calories and shed some lbs. The Fitbit syncs up and tells MyFitnessPal how many extra calories you’ve earned (i.e. how many extra calories you can EAT!), and that has been super exciting and awesome because it’s science and food, my first two loves in life (except that first one). I have to admit, calorie counting is going a little bit slower than Weight Watchers did, but things are moving in the right direction. I’ve lost 6 pounds since the end of January, and am hoping I can up that when meteorological spring finally catches up with the date on the calendar. I’ve actually only had a chance to run with the Fitbit once outdoors since November. You know, cause I basically looked like this everyday of this polar vortex-y winter: 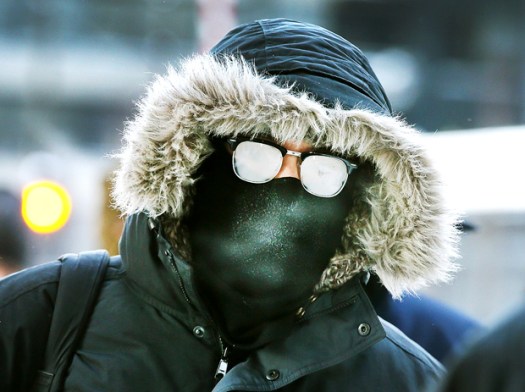 So here’s hoping I can continue to hit my 10K step goal everyday, and I’ll hit you back with another post on the logistics of using My Fitness Pal with Fitbit integration. Uh…someday. But, for right now, I can tell you that I LOVE my Fitbit, and can’t really imagine life without it. It is very motivating for increasing your daily activity, aka – “growing your flower.”

Tags: Chicago, Fitbit, Fitbit One, Leslie Sansone, MyFitnessPal, Polar Vortex
Posted in Random Thoughts, Weekly Weigh-in | Comments Off on Fitbit: One Tracker to Rule Them All