Ok, December 3, 3 blog posts AND I’ve actually made this recipe, so we’ve got 2 out of 3 that I can personally endorse. This post is brought to you with love from Nashville, the city where my bff lives. She signed up for a CSA box this year, and was apparently up to her ears in butternut squash this fall. She found this delicious and healthy soup recipe, and fed us for days on a recent visit. We ate soup for lunch, soup for snacks, and late night soup instead of late night drunk food. Yay us! 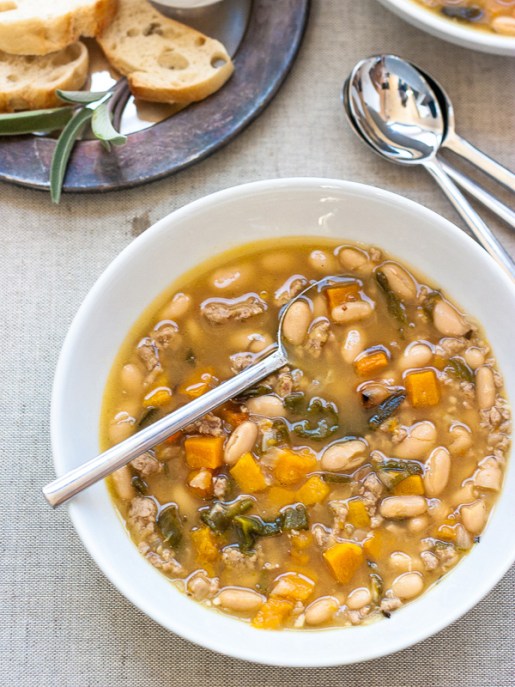 I was so impressed with this tasty soup that I turned around and made it when I got home. It really is healthy, and would actually qualify on the Weight Watchers Simple Start program, if you’re into that kind of a thing.

A few quick notes – super kudos to the bff for peeling, scooping and cutting up the squash from the CSA box – thank you for all your hard work! I bought my squash peeled and cut, cause I’m lazy. Also, she found the fresh sage the recipes calls for – I did not, so I just threw in a bunch of dried. I added a can of butter beans – a mistake. Their skins peel off and get a bit weird – stick with Northern white beans. One other note – I do have a hard time calling this chili. It’s definitely more of a soup, but if you want to make it chili, just add some chili powder (that’s what makes chili chili, right?).

Per my honor system, I’ll direct you over to Foodie Crush for the full recipe, but here are the ingredients to get you started:

Directions: for the rest of the directions and full recipe, please visit the full recipe on Foodie Crush. 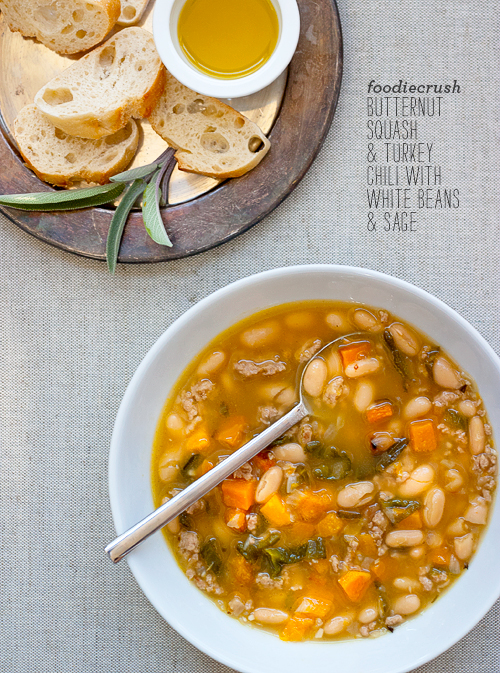 Nothing says “I’m having a super fun time at a New Year’s party” than taking a break to blog. But, seriously, I was the odd man out for Catchphrase, and I needed to get some more recipes in. Looks like I’ll have to finish up the rest of the recipes tomorrow, but this has been a solid effort…enough to make me not feel guilty.

Let’s examine the first recipes that come to mind in my semi-drunken stupor: 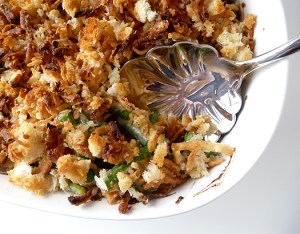 Oh, look. A green bean casserole that’s fresh. I haven’t actually read the recipe yet, so right now it’s a surprise to everyone! Just like I haven’t checked my lottery tickets for the Mega Millions, but completely assume that I am a winner. This looks like a winning recipe. Hailing from the blog, Brown Eyed Baker, this little beaut will be sure to please the crowd at your next family Thanksgiving.

1. For the Topping: Pulse bread, butter, salt and pepper in food processor until mixture resembles coarse crumbs, about ten 1-second pulses. Transfer to a large bowl and toss with onions; set aside.

2. For the Beans and Sauce: Adjust oven rack to middle position and heat oven to 425 degrees F. Fill a large bowl with ice water. Bring 4 quarts of water to a boil in a large pot or Dutch oven. Add 2 tablespoons salt and beans. Cook beans until bright green and crisp-tender, about 6 minutes. Drain beans in colander and plunge immediately into ice water to stop cooking. Spread beans on paper towel-lined baking sheet to drain.

3. Add butter to now-empty pot and melt over medium-high heat until foaming subsides. Add mushrooms, garlic, ¾ teaspoon salt, and 1/8 teaspoon pepper; cook until mushrooms release moisture and liquid evaporates, about 6 minutes. Add flour and cook for 1 minute, stirring constantly. Stir in broth and bring to simmer, stirring constantly. Add cream, reduce heat to medium, and simmer until sauce is thickened and reduced to 3½ cups, about 12 minutes. Season with salt and pepper to taste.

4. Add green beans to sauce and stir until evenly coated. Arrange in an even layer in 3-quart (or 9×13-inch) baking dish. Sprinkle with topping and bake until top is golden brown and sauce is bubbling around edges, about 15 minutes. Serve immediately.

*Note 1: You can prep this ahead of time. Store the bread-crumb topping in an airtight container in the refrigerator and combine with the onions just before cooking. Combine the beans and cooled sauce in a baking dish, cover with plastic wrap, and refrigerate for up to 24 hours. To serve, remove the plastic wrap and heat the casserole in a 425-degree oven for 10 minutes, then add the topping and bake as directed.

*Note 2: This recipe can be halved and baked in a 2-quart (or 8-inch square) baking dish. If making a half batch, reduce the cooking time of the sauce in Step 3 to about 6 minutes (1¾ cups) and the baking time in Step 4 to 10 minutes.

*Note 3: If you want to go 100% homemade and eliminate the canned fried onions, you can make your own caramelized onions. Thinly slice 2 sweet onions and saute in 2 tablespoons of unsalted butter over medium-high heat for about 10 minutes. Reduce heat to medium-low and sprinkle with salt and cook, stirring occasionally, for about 30 minutes, or until the onions are golden, caramelized and soft. Set aside to cool before combining with remainder of crumb topping. Proceed with the recipe as directed.

Oh, hey, that actually looks pretty good. I still haven’t read the recipe completely yet, but plan on doing so next year… :) 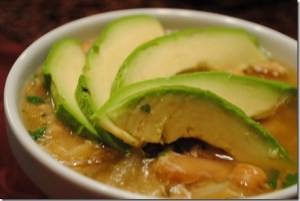 Actually not from Rick Bayless, although I’m sure he would approve. This one comes from “Leftovers for Lunch,” a situation I rarely identify with. It’s more like “Lean Cuisine for Lunch” for me, speaking of which, look forward to more Chew and Reviews in 2011! 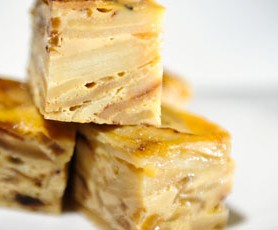 Yet another NOT from Rick Bayless. This one looks like some sort of eggy, breakfasty thing that Wylie Dufresne and Rick Bayless would both approve of. From See…Read…Cook, this can be made for breakfast or whenever your heart desires.

Kosher salt and pepper to taste

Note:  If you have a mandolin, it will come in handy for the slicing process.

In a large bowl, mix the eggs together just until incorporated.  Once the potatoes and onions are well drained, add to the eggs.  Season with salt and pepper.

Now, this is probably best done in a large non-stick skillet, but if you don’t have a non-stick then make sure you use enough of the reserved oil in your skillet to make sure the tortilla doesn’t stick.  (even with non stick, you should have a bit of oil in the pan)  And make sure your skillet is hot.  The egg sets faster and that helps with the no stick issue.

Pour the mixture into the hot pan and stir with a spatula to create some texture.  After about a minute or so on high heat, lower the heat to medium-high and cook until the eggs are mostly set.

Take a large plate or platter and place over the tortilla.  Take the pan and carefully but quickly flip it over so the tortilla is now sitting on the platter.  Slide the tortilla back into the skillet so the other side can cook and brown.  Cover and cook for an additional 3-5 minutes.

Once done, carefully slide out onto a large cutting board and let cool for about 15 minutes.  Cut into wedges and serve with Spanish sausage, Crema, Sofrito, or Roasted peppers.

And that’s a wrap for 2010. See you all tomorrow for the last of the recipe roundup!

Oh, remember when I told you that I was going to post a recipe a day until December 31? Well, what I meant was that I would post a recipe a day until December 31…unless I got really busy, or was celebrating a major holiday and kept on celebrating all weekend. So…whoops. To make up for my lies, here are five recipes. We’ll start with a few ways to get rid of your Thanksgiving leftovers.

Combine leftover turkey and stuffing in a skillet. Pour leftover gravy over turkey and stuffing until moist. Cook thoroughly. Mixture should be creamy, but not soupy. Once mixture has come to a low boil, serve on bread. I like to whip up cranberry mayo to add to these sandwiches. This recipe can be made using box stuffing (make according to recipe on box) and jarred gravy. Results will still be delicious. 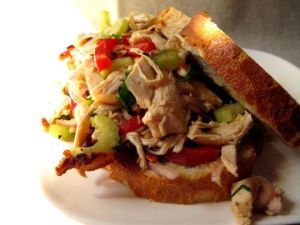 Here’s a really good one from The Kitchn. I’ve made these sandwiches before, and I imagine you could easily sub turkey for chicken. This recipe is great if you’re not into mayonnaise (I’m way into mayo, btw).

Preheat the oven to 425 degrees. Rub some olive oil over the chicken breasts and season them with salt and pepper. Roast for 25-30 minutes, depending on how thick the breasts are. The skin does not need to brown; you just want the meat to cook through. Let cool slightly, then peel away the skin and shred the meat. You should have about 3 1/2 to 4 cups. Drizzle the chicken with a bit of the juices from the pan, just to keep it moist.

Make the vinaigrette. Whisk together the vinegar, mustard, salt, pepper, and sugar. Stream in the olive oil, whisking vigorously, until combined.

Combine the onion, celery, red pepper, almonds, parsley, and shredded chicken in a large bowl. Pour in the vinaigrette and toss to coat.

Make the sandwiches, putting two slices of bacon on each, topped with one-sixth of the chicken salad. 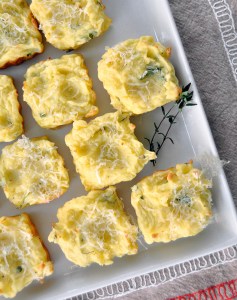 Still working on clearing that mountain of leftover mashed potatoes? Try these quick and easy potato puffs, also from The Kitchn.

Heat the oven to 400°F and lightly grease the cups of a regular muffin tin, or a mini-muffin tin.

Whisk together the mashed potatoes, the eggs, 1/2 cup of cheese, the chives, and ham. Taste and season, if necessary, with salt and pepper.

Put a spoonful of the mixture in each muffin cup. Sprinkle the top of each potato puff with grated cheese. Bake for 20 minutes, or until the potato cups are set, browned on top, and hot through and through. Serve immediately. 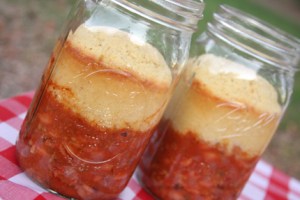 Basically, this looks amazing. Chili in a jar with cornbread baked on top – genius! Just whip up a batch of chili, then add cornbread batter and bake. Perfect for picnics, perfect for an evening dinner…just perfect for anytime. Here is the recipe for cornbread, but I imagine you could use a mix as well:

Mix until combined and bake at 375 F for 20-25 minutes or until toothpick comes out clean. Read the whole recipe and story at The Givers Log. 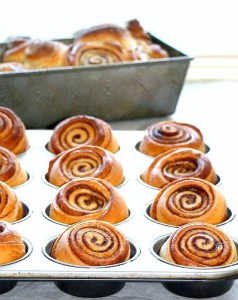 I love cinnamon. I love cinnamon rolls. And I LOVE getting Cinnabon at the airport. For me, the airport is the Bermuda Triangle of food. There is everything I could ever want, I’m guaranteed to be stressed, I’m typically traveling alone, and suddenly, food just disappears into my mouth… Here is a recipe from Elra for Cinnabon at home. It appears that she’s baking in Europe and has never actually eaten a Cinnabon, so this might not taste exactly like the real thing, but I’m willing to bet they taste pretty damn good.

Place everything, but the butter in a mixer bowl, knead on the lowest setting  for 1 minute. Increase the speed to speed #2. Knead until the dough is smooth and elastic, about 5 to 10 minutes, add the cubed butter in three or four addition, continue to knead until gluten is fully develop. Oil lightly a container or a large bowl. Place the dough in it, cover with plastic or a lid, let the dough ferment for 1 hour, then refrigerate overnight.

Bake in the middle rack for 15 minutes. Invert immediately onto cooling rack to cool completely before glazing with your own desire glaze. Since I am not a big fan of glaze, I drizzled the rolls lightly using a simple confectioner’s sugar and lemon.

Read the rest of the recipe, include the ingredients for the sugar/cinnamon filling here.