Party in the USA with Gilbert’s Craft Sausages 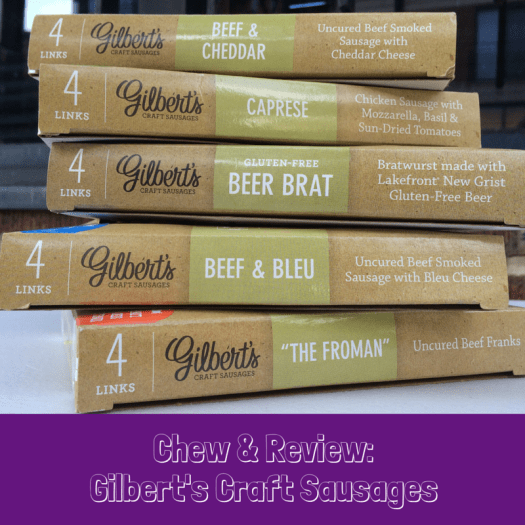 If you haven’t noticed lately, it is summer here in Chicago. In fact, just yesterday we marked the meteorological arrival of summer, and what better way than to mark the first day of summer by arriving to work dripping sweat from head to toe. The best part about Chicago in the summer is everything (besides the literal dripping of sweat), but backyard BBQs will always hold a special place in my heart. Growing up in a big grilling family (albeit well-done grilling family, which I’ve since changed, sorry Mom!), it was always a treat when Dad fired up our antique charcoal grill and went to town. I’ve continued this tradition, always grilling on a charcoal, but also having recently turned 35, my totally fabulous, amazingly wonderful parents gave me a tiny gas grill in my shower of birthday presents, and I can’t wait to try it. Look at how cute this thing is:

You know what’s made for a grill, whether it’s charcoal or gas? Sausages. If you think about it, they’re basically the perfect grilling food. In fact, I think they deserve “the most portable of all grilled foods” award, which is now a real thing. You can eat them in a bun, you can also grab one right off the grill and pop it in your mouth, which no one ever does with a hamburger. You can also slice them and add them to other recipes. No one does that either with hamburgers. So, sausages, yeah – summer’s best grilling food.

I recently had a chance to try out Gilbert’s Craft Sausages, a local Chicagoland company, and The Official Chicken Sausage of Wrigley Field. You know, where the Cubs play? Kind of a big deal. Perhaps you’ve peeped their sign over in right field – fancy (…that is right field, right?). 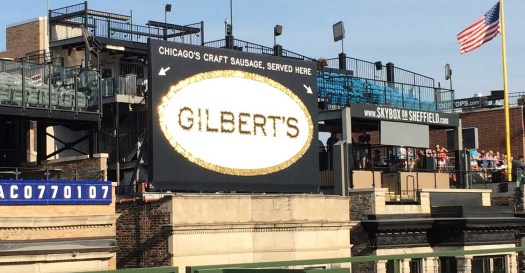 After a few conversations with GCS regarding me throwing an extravagant June backyard bbq which never quite materialized, the good folks at Gilberts rush ordered me a cooler full of sausage when it looked like I’d be able to get my act together for a Memorial Day sidewalk cafe bbq affair over at the Main Squeeze’s place. “Cooler full of sausage” is practically my favorite four word phrase in the English language, so I was beyond pumped to get a variety pack of flavors. 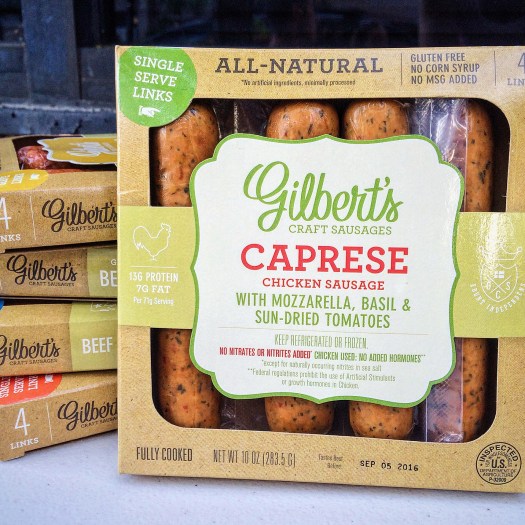 So one of the coolest things about Gilbert’s sausages, besides the awesome packaging and logo font I’m totally obsessed with, is that they come individually wrapped. Have you ever opened a package of hot dogs or sausages, eaten a couple and then when you opened them later in the week, they were just…gross? That doesn’t happen when your links are on lockdown tighter than George Bluth in prison.

As was the case with the whole thrown-together theme of the bbq, we threw the sausages on the grill. Another favorite thing about these links? They’re all fully cooked, so no worries if you like the lightest of char on your sausage. 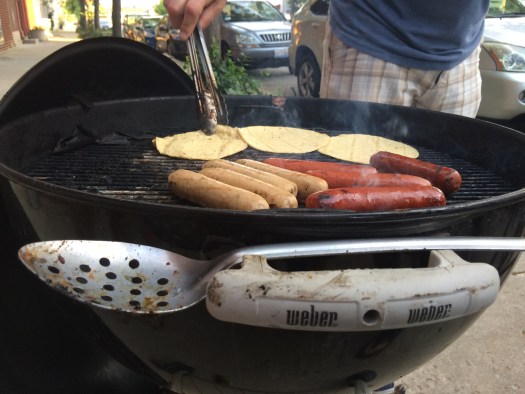 At this point into the evening, thanks to a “cooler full of beer,” a close cousin to the “cooler full of sausage,” we were getting our sausages all mixed up, and instead of the neat, tidy, labeled affair I had in mind, the sausages looked like this: 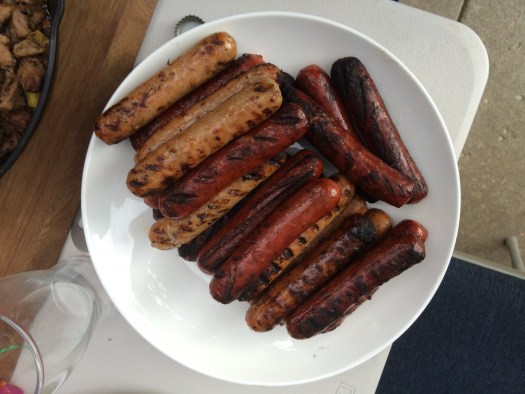 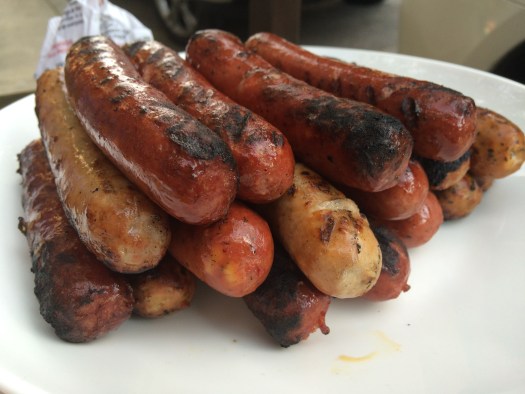 Out of this sausage soiree, I tried the Caprese (with Mozzarella, Basil & Sun-Dried Tomatoes) and the Froman (the uncured beef frank). The Caprese was light, but with a good amount of the tomato-basil flavor coming through. I was a HUGE fan of the Froman, which doesn’t surprise me, because I adore all-beef hot dogs. While those were the only two I tried during my semi-disastrous unlabeled sausage fest, thankfully I had the mental fortitude to save a few packages back and take them to the grilling great himself, my Dad. We had the Beef & Bleu and the Chicken Bratwurst. 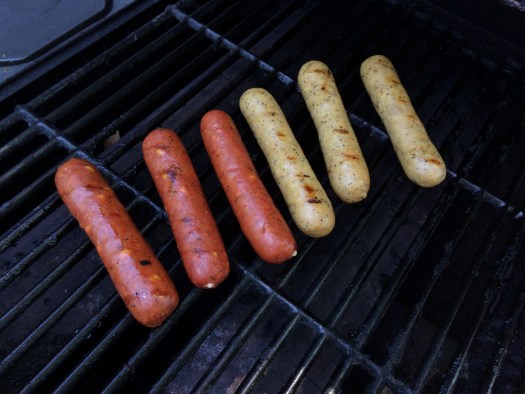 Now THIS is how you keep ’em separated, folks. 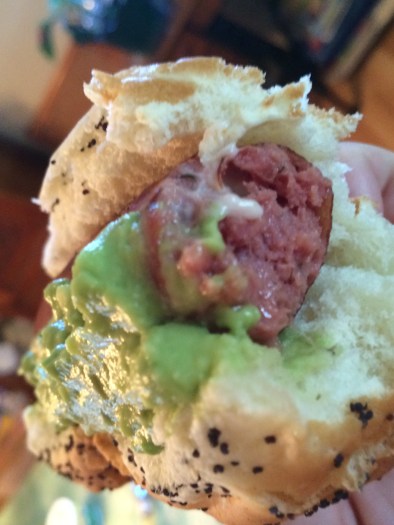 Behold! The Beef & Bleu Cheese, topped with a swath of avocado spread, because everything’s better with avocado. This was even better than The Froman, with the definite telltale zing of blue cheese, but not so much to be overpowering. The chicken bratwurst was equally as delicious, and so much better for you than eating a standard brat. It tasted almost exactly like the real thing – I’ll definitely be stocking up on these for lightened up summertime bbqs.

I came home from the trip to Mom & Dad’s with leftovers, because they’re the kind of awesome people who send you away with tons of food. I whipped up some of these leftovers for Main Squeeze, but I really couldn’t decide whether to give him the Chicken Brat or the Beef & Bleu, because really, I wanted them both. We did come up with a compromise: 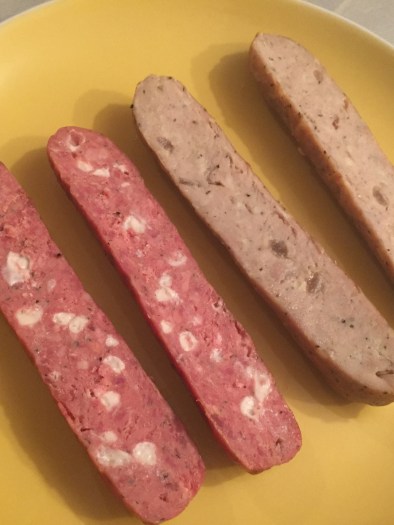 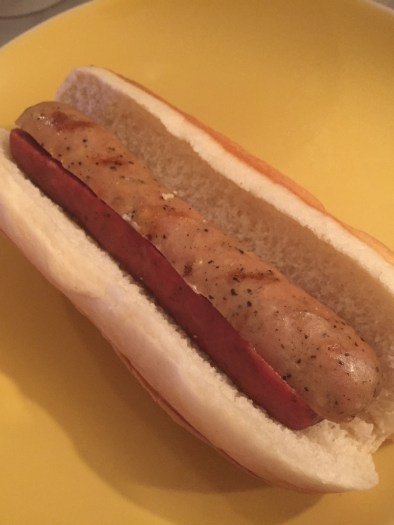 Here are a few more pics of the sausage party: 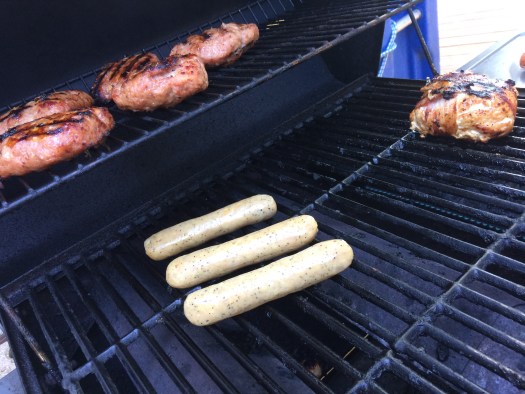 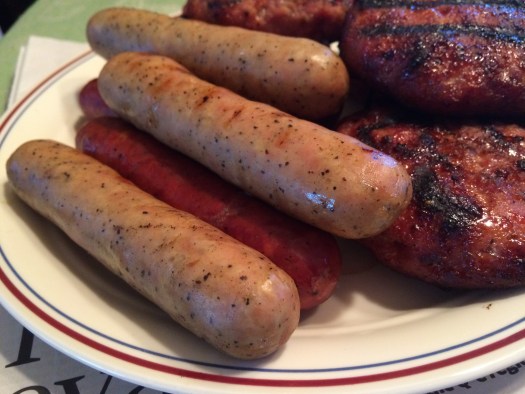 You can find their sausages at tons of stores around Chicago, including Jewel & Mariano’s. You should really take a look at their site, because it’s FULL of awesome recipes you can make with their sausage, other than just slapping it in a bun. They’re also active on social media, and I recommend following them everywhere so you can surround yourself with sausage.

Standard disclaimer: these sausages were provided to me gratis from Gilbert’s Craft Sausages. However, I would completely and totally buy them with my own money, because they are delicious, and I especially love that they’re a new hometown favorite. My first purchase is going to be the Aloha Chicken, fyi. If you want more details on the flavor of these sausages, check out my blogger friend Jeff’s review on Make it Like a Man. 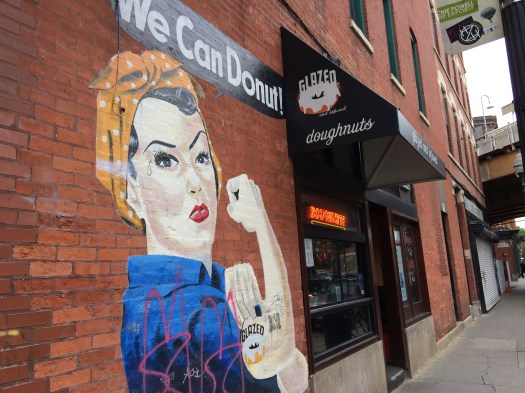 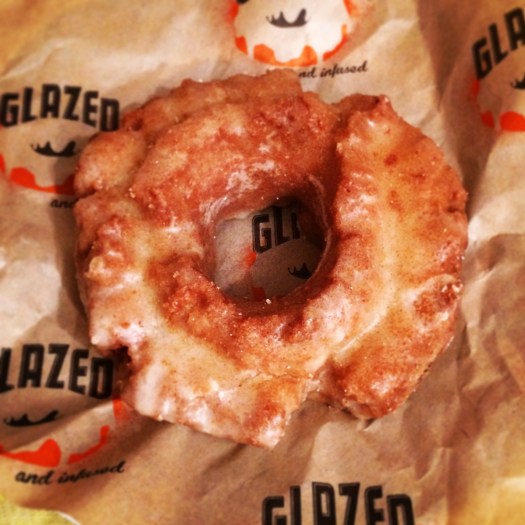 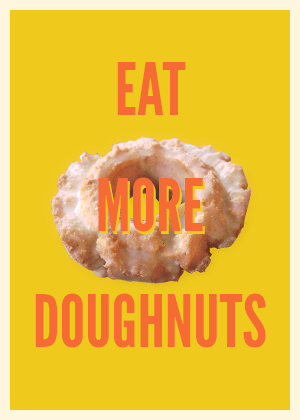 I’m not quite certain how this blog turned 4 years old (Um, what?!? This blog is 4 years old?!) without me talking to you about my absolute, unwavering, unconditional love for Trader Joe’s. 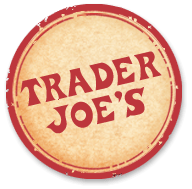 Have you been to a Trader Joe’s? If not, let me paint a picture for you: Imagine yourself in a magical land of grocery items, many of which are specialty items, unavailable at your local grocery haunts. Now imagine all the employees are super happy to see you and are actually helpful in a friendly way. Sounds good, right? Absolutely, now imagine yourself walking through a magical aisle of wine – wines of an astounding variety, wines with super cheap prices ($2.99), wines that magically end up in your cart and typically add up to at least a case. Apply this scenario to almost every aisle in Trader Joe’s, and you could understand how it’s one of my most favorite places to shop for my most favorite of all things: food.

Then I stumbled on these little gems, which somehow also magically ended up in my cart: 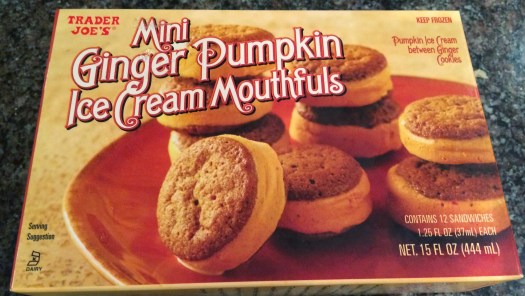 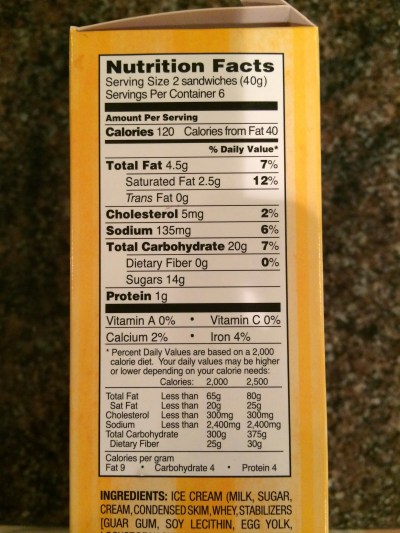 Not bad at ALL for little ice cream sammies! Here’s how they really look: 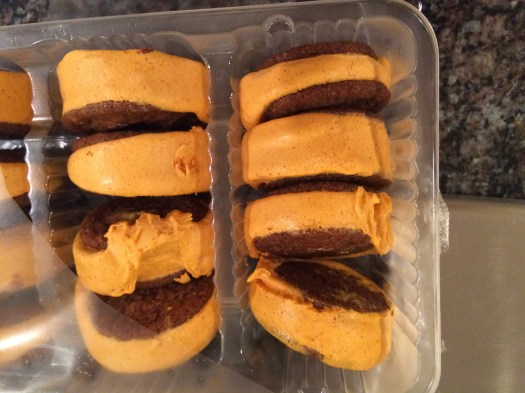 These particular mini mouthfuls look like they may have melted a little on the way home, but they tasted FANTASTIC! They’re a gingersnap with delicious pumpkin ice cream inside. It was love at first bite for me, and I’m particularly excited to be dog sitting, meaning I don’t have to share these with anyone this week. I did think as I chewed along, that the ginger overpowered the pumpkin ice cream just a bit, but they were still delicious nonetheless.

Would I buy them again? You bet! I’m not sure how long they’ll last at Trader Joe’s, so you might want to head over and scoop some up. I imagine they’d pair nicely with any fine Charles Shaw variety. #TwoBuckChuck