Well, these pretty much look amazing. I might have to whip some of these up while I’m at home for Christmas… I would imagine you could also sub in fruit filling instead of the cinnamon sugar. This recipe is from The Kitchn.

P.S. Cheers to 3 weeks of pretty regular recipe-posting. And since this blog didn’t start as a recipe recycle bin, I plan to give you a review of the new Weight Watchers system and a weight loss update soon. Spoiler alert – I’m kind of liking it and so is the scale. 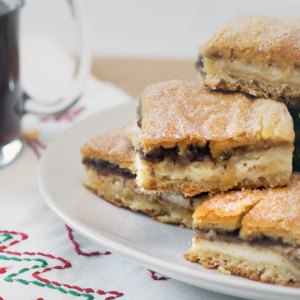 For the Cinnamon Filling
Melt butter in a small saucepan over medium-low heat. Add brown sugar and cook until sugar and butter are well combined, about 3 minutes. Remove from heat and allow to cool for about 10 minutes. Whisk in egg, cinnamon, and salt. Set aside.

Roll out 1 can of crescent roll dough into the bottom of the casserole dish to form a crust, making sure to press seams together.

With an electric mixer, beat the cream cheese, egg, sugar, and vanilla until well combined. Spread the filling evenly over the crust with a rubber spatula. Pour the cinnamon filling over the cream cheese mixture and spread out evenly (I used a silicone pastry brush).

Roll out remaining can of crescent roll dough onto large sheet of wax paper. Pat out dough to form a 9 x 13 inch rectangle, carefully pressing the seams together to seal. Gently flip the wax paper/dough over the cinnamon cream cheese filling to form a top crust.

Bake for 30 minutes until top crust is golden. Remove from the oven and dust with additional sugar. Cut into 2-inch squares, or smaller if feeding a crowd. Serve warm or at room temperature. Recipe can be made the day before and cooked before serving OR freeze cooked bars and thaw before eating (if serving at room temperature).

Tags: Recipes
Posted in Breakfast, Dessert, Recipe of the Day, Recipes | No Comments »